The task began by taking a walk through our chosen site of Footscray. While on my journey through Footscray the topic of gentrification was constantly in the back of my mind and as such I was particularly drawn to moments that reminded me of themes that related back to gentrification, this being pieces of Footscray that had moments of the old vs new. As a group, we then began to think of a concept that reflected our connection Footscray. As such after analysing all our findings we realised we were especially drawn to themes such as Materiality, Transformation, Colour and Old vs. New. From this, we tried to unpack these further and narrowed in on the theme of Old vs. New where our concept of Cryptomnesia (otherwise known as Déjà vu) was born. My users Scoliosis was a trait-based off a medical condition I have and its connection back to our group concept was about reliving a shameful past experience she has had with Scoliosis – in particular having to wear the back brace – and morphing it into something stylish and trendy. To do this there were a couple of issues that had to be tackled with regards to the user’s negative past experience with the back brace which included the following issues: too bulky, not flattering when on, uncomfortable, not versatile to wear with other clothing.

The precedents above played a pivotal role in my design thinking as I based the form of Embraced off of the original Milwaukee back brace shown through my minimalistic brace form ideation. Aimee Mullins made me want to reverse the role and turn a disability into something to be proud through backhanded comments like “Wow, your posture looks amazing!” Tinker Hatfield said that “If you have an athlete with the right personality, you can challenge the perception of the entire sport.” This was something that really resonated with me as my ultimate goal was to try and challenge the perception of back braces.

Although Embraced is not functional to the same extent as the Milwaukee back brace in a sense that it doesn’t straighten your spine when worn, it does, however, improve posture. The result of the garment ultimately tries to tackle a number of the initial problems found with the original Milwaukee back brace through its modular design as you’re able to accessories Embraced however you please, whether this is subtle for work, or bold for special occasions. 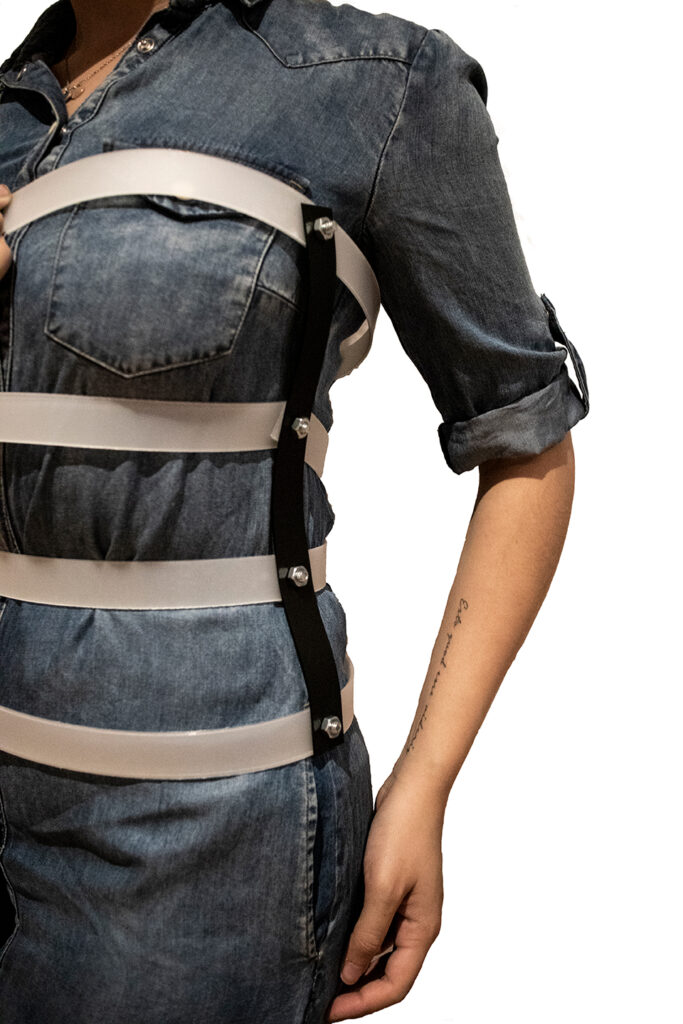 The overarching goal of Embraced is to change the perception of back braces and thus, I hope like dental braces and glasses the back brace can catch on as a fashion trend to generate a conversation about scoliosis as a starting point, to help normalise the look of back braces. As such those who do have scoliosis and have to wear a brace can focus on straightening their spines for the benefit of their wellbeing instead of worrying about what other people think of them when they wear the brace.