Whilst walking through the streets of Footscray there is an overwhelming abundance of colour, culture and community. Capturing moments where citizens were in the place they feel is home, as well as the architecture which tells a story of the city over time. Combining these elements and from the photos which I had collated from my walk, I kept noticing the layered compositions and various physical representations of ‘layering’ such as bill posters which had been pasted on top of each other. My concept looks at using layering to describe the elements which make up Footscray’s identity. The origin of the word “layer” comes from a worker’s occupation, typically a mason and relates to Footscray’s working population.  However, when relating the work layer to fashion and textiles it can be “…represented as a sheet, quantity, or thickness of material, typically one of several, covering a surface or body.” (Oxford) When coming up with a concept that I thought represented the city, I looked back to my photo archive and thematically organized the photos. There were so many photos of post-ups, that were mainly political or had a message behind them. I also noticed moments of community and culture in most of the photos I had taken. The concept I created was, “CULTURE and COMMUNITY are the LAYERS of a city.” In this image, I have shown the path I took during my walk, in red. This shows me walking from Footscray Railway Station along Irving Street and through the Footscray Market. The map is created with blocks filled with photos that represent, culture, community and layering. When brainstorming ideas for a wearable garment for my client, I made sure I took into consideration her requirements such as practicality and function. As well as creating a personal touch which showcased her love for Footscray and her work as a social worker. The diagram above shows a typical day in my client’s life as well as her weekly hotspots – her home, work, the market and her children’s school.

I took inspiration from fruit mesh material, often red in colour and contains onions or oranges. I found a similar material at a hardware store called bird netting. I experimented with the stretchy quality and how it could be manipulated. I cut and sewed the material with red thread to show how the elements of the garment came together.

The final design is adjustable to make sure my client can still ride a bike whilst wearing the garment. It has press studs which transform the long coat into a shorter jacket which billows. The red thread is a subtle detail however shows the emotional ‘attachment’ the client has with Footscray. A personal detail at the bottom of the coat reads “I am 3011” which is the postcode of Footscray. This is embroidered in a child-like way (reflecting her sense of family) which means that from afar it may not be legible. However, when she wears this garment she can feel proud to be from Footscray. 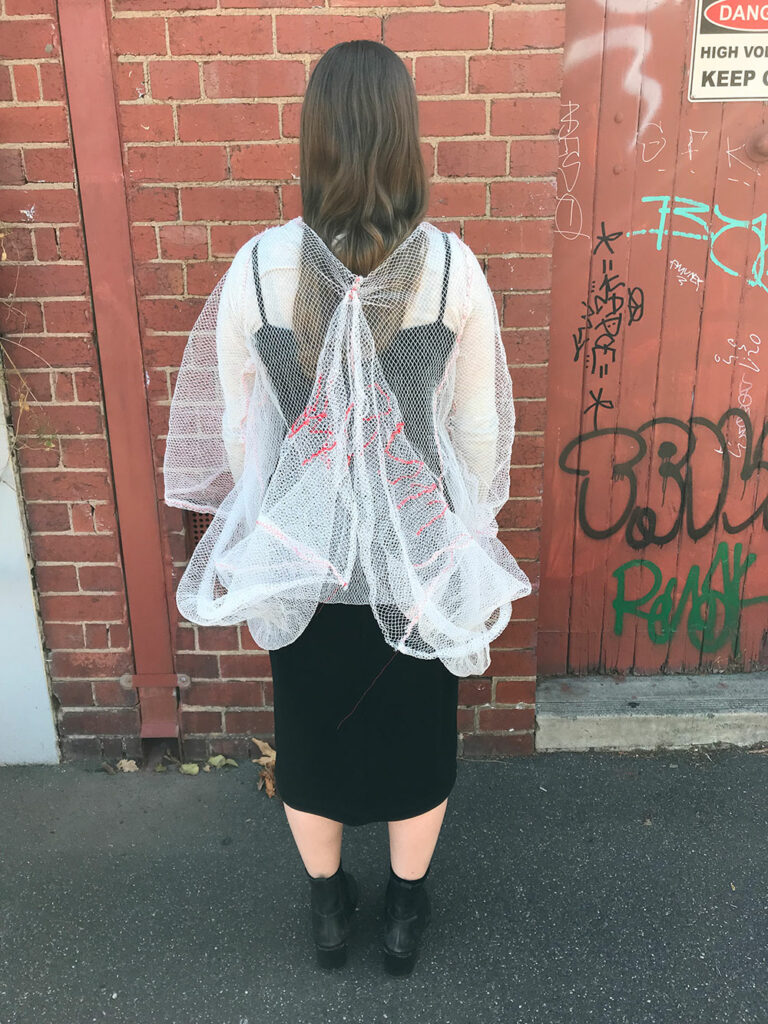